USDA pegs Illinois No. 1 for soybeans, No. 2 for corn output 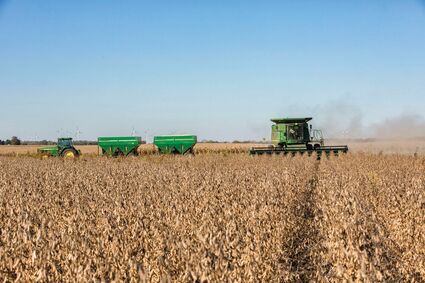 Local farmers contribute to Illinois' rating as No. 1 in soybean production.

In Illinois, soybean production totaled 672 million bushels with an average yield of 64 bushels per acre (up 4 from 2020). Both are tops in the nation and the yield is a new state record, surpassing the previous mark of 63.5 bushels recorded in 2018.

USDA estimated 2021 sorghum production at 448 million bushels, up 20 percent from last year due to a 24 percent rise in acres. The average sorghum yield (69 bushels) was down 4.2 percent from the previous year.

Demand remains relatively strong for corn used for ethanol. It's up 75 million bushels to 5.32 billion bushels.

On the demand side, ethanol (corn use) increased by 75 million bushels because of strong demand and margins.

As for wheat, Illinois harvested 610,000 acres last year with a record statewide yield of 79 bushels per acre. USDA estimates farmers planted 34.4 million acres of winter wheat last fall, up 750,000 from the previous year.

This story was distributed through a cooperative project between Illinois Farm Bureau and the Illinois Press Association. For more food and farming news, visit FarmWeekNow.com.