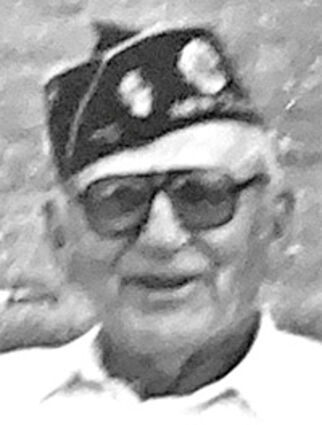 Kenneth Kunz, 97, formerly of New Douglas, Ill., died peacefully in his sleep on Tuesday, Aug. 16, 2022, at Aspen Creek of Troy Nursing Care in Troy. He was born on June 17, 1925, in Sorento, the son of the late Charles and Mary (Engleman) Kunz. He was married to Edna Hallemann as well as Irene Bauer who both preceded him in death.

Kenneth served our country as a Sergeant in the United States Army during World War II from October 1943 to July 1946. During his service he received the Purple Heart. As a Squad Leader, his division was one of the first to aid prisoners in a Nazi concentration camp. Kenneth was a member of the Tobias Bilyeu American Legion Post 710 in New Douglas for over 60 years. He worked most of his life as a plasterer for Kunz Plastering Company.

He is survived by a brother, Nelson Kunz; his daughter, Sandra Porzio; granddaughter, Amie Dann; and many loving nieces and nephews. Kenneth was also preceded in death by his parents; his wives; his brothers, Herbert and Carl Kunz; and sisters, Irene Davis and Edith Cruthis.

Private interment of his cremains will be held on Thursday, Sept. 1, at 10:30 a.m. He will have full military honors at his gravesite at the New Douglas Cemetery in New Douglas. Those military honors will be provided by the Staunton Area Veterans Honor Guard and their bugler.

Lesicko Funeral Home in Livingston is in charge of arrangements.