Off The Wall gets new mural 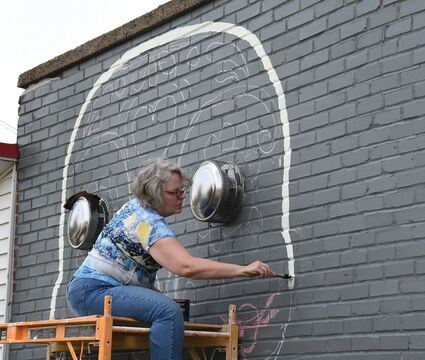 Holly McPheeters of Staunton works on the white outline of the calavera that will decorate the wall of Off the Wall Tacos in Benld thanks to a partnership with the Macoupin Art Collective and Colt Dean, owner of the taco shop and its sister food truck.

Those who have made the trip to Off The Wall Tacos in Benld know that the food there is a thing of beauty. Now, with the help of the Macoupin Art Collective (The MAC), the eatery will be just as beautiful on the outside.

Volunteers with The MAC started work on a new mural at the taco shop, located at 300 Central Avenue in Benld, on Thursday, June 9, in a joint venture between the group and the owner of the business, Colt Dean.

"I think Colt approached Brandy (Cloud), she's the director at the MAC," explained Sarah Walker, the instructor for the mural at Off The Wall. "We had a couple busine...