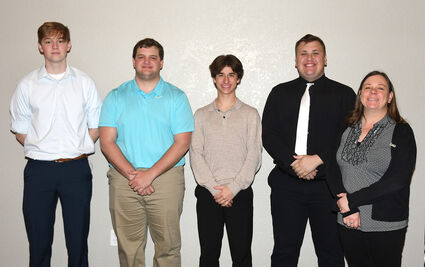 Honoring the qualities of good citizenship, members of the Christiana Tillson chapter of the DAR (Daughters of the American Revolution) hosted their annual Good Citizen Awards brunch on Saturday morning, April 9, at the Free Methodist Church in Hillsboro. After brunch, DAR member Kendra Wright welcomed the recipients and their families. The award and scholarship was established in 1934 and recognizes individuals who possess the qualities of dependability, service, leadership, and patriotism in their homes, schools, and communities. Although schools vary in their selection process, winners are selected by their teachers and peers for demonstrating these attributes. This year's winners are Dalton Brunnworth of Mt. Olive High School, Joseph Cisler of Staunton High School, Timothy Downen of Hillsboro High School, Sidney Glick of Lincolnwood High School in Raymond, Emma Hill of Nokomis High School and Spencer Hoehl of Litchfield High School. Each recipient will receive a $1,000 scholarship with an additional $500 awarded to the local chapter's winner. Spencer Hoehl submitted the winning chapter essay, a 500-word essay with the theme, "How do the qualities of good citizenship support our nation?" His essay was then submitted to the District V level, which is comprised of 15 chapters that serve numerous high schools. Funding for the annual scholarships is raised from the chapter's annual trivia night and sponsorships from within the students' communities. Dalton Brunnworth Dalton Brunnworth is the son of David and Melissa Brunnworth of Mt. Olive. A senior at Mt. Olive High School, he is involved with the golf and bass fishing teams and is a member of the National Honor Society, band and scholastic bowl team. Outside school, Brunnworth is a member of the Boy Scouts and St. John Paul II Church. After graduating from high school, Brunnworth plans to attend college and hopes to work for the Environmental Protection Agency as a civil/environmental engineer. Joseph Cisler Joseph Cisler is the son of David and Susan Cisler of Staunton. A senior at Staunton High School, he is a part of the golf, scholastic bowl and track and field teams, as well as Student Council, STEM Club, National Honor Society, Chess Club and band. He has also served as a class officer. Outside of school, he attained the rank of Eagle Scout in the Boy Scouts program and volunteered with the Staunton Chamber of Commerce for the Snacks with Santa and Balloon Glow events. After graduating from high school, Cisler plans to attend Southern Illinois University at Edwardsville to study computer science. He hopes to work in cybersecurity. Timothy Downen Timothy Downen is the son of Tim and Aprill Downen. A senior at Hillsboro High School, he is part of the band, Chamber Choir, scholastic bowl team, Student Council and National Honor Society. He has also served as class president. Outside school, he has worked on a Diabetes mentorship and enjoys volunteering. He also has a job at Robin's Nest in Hillsboro. After graduating from high school, he plans to attend McKendree University to study pre-med/neuroscience. He also hopes to attend medical school and become a prison psychiatrist in the future. Sidney Glick Sidney Glick is the daughter of Lance Glick of Farmersville. A senior at Lincolnwood High School in Raymond, she serves as both National Honor Society president and a class officer. Glick is also a member of Student Council, president of Spanish Club and is the head of design for the yearbook. She is also part of the Student Leadership team, Lincolnwood Community Service Organization, volleyball and softball teams and the Prom Committee. Outside school, she participates in travel softball and club volleyball. After graduating from high school, she plans to attend Lincoln Land Community College to study environmental engineering. She hopes to be an engineer in the future. Emma Hill Emma Hill is the daughter of Shad and Michelle Hill of Nokomis. A senior at Nokomis High School, she is involved with the softball and cheer teams, serves as president of Student Council and president of the senior class and is a member of National Honor Society. Outside school, she spends time volunteering with the First Baptist Church in Nokomis. After graduating high school, she plans to attend Maryville University this fall to major in pre-athletic training. She hopes to return to school and get her master's degree in physical therapy. Her dream job would be to work as an athletic trainer or physical therapist for the St. Louis Cardinals. Spencer Hoehl Spencer Hoehl is the son of Richard and Tracey Hoehl of Litchfield. A senior at Litchfield High School, he is involved with the LHS Rocketry Club, Student Council, scholastic bowl team, band, National Honor Society, soccer and baseball teams, Eco-Team, spring musical and AV Club. Outside school, he is a lifeguard at Litchfield Memorial Pool, a swim team coach for the MCST Sharks, a volunteer at the Litchfield Summer Gifted Academy and a trumpet player for ceremonies honoring veterans and soldiers. After graduating high school, Hoehl plans to attend college to study aerospace engineering sciences. He hopes to be a commercial pilot or a green-energy aerospace entrepreneur in the future.

Honoring the qualities of good citizenship, members of the Christiana Tillson chapter of the DAR (Daughters of the American Revolution) hosted their annual Good Citizen Awards brunch on Saturday morning, April 9, at the Free Methodist Church in Hillsboro.

After brunch, DAR member Kendra Wright welcomed the recipients and their families.

The award and scholarship was established in 1934 and recognizes individuals who possess the qualities of dependability, service, leadership, and patriotism in their homes, schools, and communities. Although schools vary in their selection process, winners a...