The Terrier 8th grade basketball team traveled to Greenville last week to play in the 74th Annual James Burke Memorial Tournament. The program was looking to win its first game at the event since joining the field four years ago. Not only did the Terriers win a game, but they went 3-0 on the week to capture the title.

Up next for the Terriers was a semifinal matchup against #4 Effingham St. Anthony on Thursday. Staunton had its worst defensive effort of the season, falling behind 11-3 after one quarter and 25-14 at the half. However, a frantic second half saw SJHS tie the game up and eventually win it in overtime by the score of 53-45. Looney (four 3's) paced the attack with 18 points. He was joined in double figures by Moore (15 points) and Laux (12 pts.). Jeremiah Graham (4 pts.), Lucas Coalson (2 pts.), and Brown (2 pts.) rounded out the scoring. 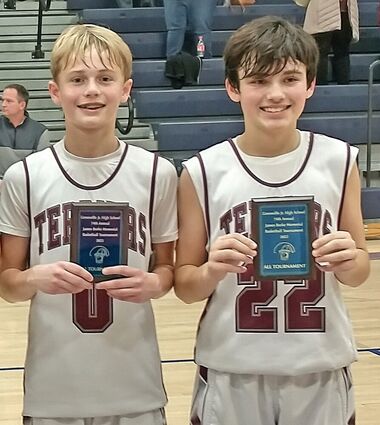 Owen Looney and Isiah Laux were named to the All-Tourney team at Greenville.

The victory on Thursday set up a championship game on Friday against #2 seed Salem. The Bobcats were the biggest team Staunton has faced to date and had a considerable size advantage at every position. However, the Terriers scrapped their way to the win by hitting 11 3-pointers and timely free throws down the stretch in a 50-43 victory. Laux hit five 3's and both of his free throws to post a season high 19 points. Looney popped in four 3's to finish with 15 points, while Moore made two 3's and 80% of his free throws to finish with 14 points. Graham scored on a key drive late in the game to round out the scoring.

In addition to the team championship, Isiah Laux and Owen Looney were honored for their fine play at the event with spots on the All-Tournament Team. They were joined by Trey Clark (Salem), Leo Sullivan (Greenville), and Miles Waldhoff (Effingham St. Anthony).

The 8th grade Terriers will now focus on postseason play. Staunton drew the #1 seed in a loaded Regional that includes #2 East St. Louis, #3 Vandalia, #4 Roxana, #5 Greenville, #6 Wood River Lewis & Clark, and #7 East Alton. The 7th grade opened play at the East St. Louis Regional on Saturday with a win over Wood River and resumed action this week with a semifinal game against Vandalia on Monday. The championship will be held on Wednesday.