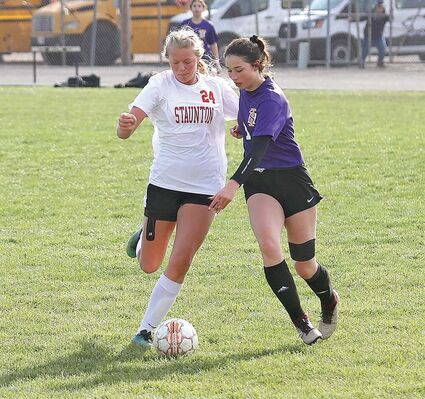 JAMIE KINDER FOR THE STAR-TIMES

Danielle Russell stays a step ahead of the Taylorville player in the game played in the Litchfield Tournament. Staunton captured 3rd place.

The Staunton High School girls soccer team now has a season record of 4-3-1.

After tieing Maryville Christian on March 14th (3-3), the girls lost a home game to Breese Central on March 21, 1-5. The Lady Bulldogs one goal was by Lexi Pfeiffer with an assist by Lily Bruhn. Valeria Cazares was the goaltender. she had 27 shots on goal, made 22 saves and allowed 5 goals.

On March 24, Staunton lost to Auburn 1-3. Staunton's goal was by Bruhn. Cazares was the Lady Bulldog goaltender. She faced 7 shots on goal and made 4 saves.