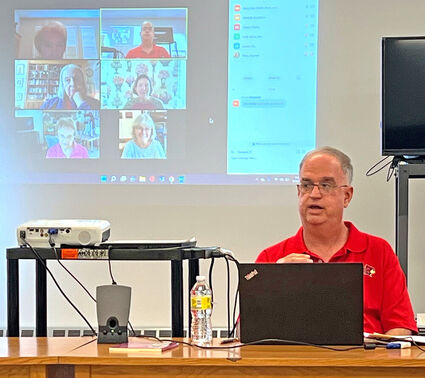 Author Tom Emery was joined virtually by members of another chapter as he spoke to the Alpha Tau Chapter in Carlinville.

At the Alpha Tau Chapter of DKG ILSO meeting held on Saturday, Sept. 11, at the Regional Office of Education building in Carlinville, Tom Emery, historian and author from Carlinville, was the guest speaker.

He shared information about four of the 22 women he wrote about in The Notable Women of Illinois. Tom introduced us to Mary Ann Bickerdyke, Jane Addams, Francis Willard and Gwendolyn Brooks. He even commented that of the many presentations he has done, this was the first he did sitting down, talking into a computer on Zoom.

At this hybrid meeting (both in person and on Zoom), we had several members of another chapter along with two of our own members join us on Zoom.

Mary Ann Pollitt conducted the meeting as the newly elected chapter president. In addition to the regular order of business, discussion was held on the October meeting to be held in Staunton at The MAC. After brunch at Blackbird Bakery & Café, members will be working on a project at the Macoupin Art Collective, a nonprofit school of arts and crafts.

This meeting ended with a carry-in lunch which was arranged by member, Andrea Duncan.