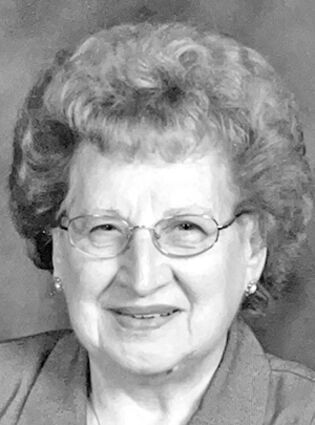 Prior to their marriage, Verlene worked for Edwardsville National Bank as a bookkeeper for eight years. In the early years of their marriage, they split their time living between Rolla, Mo., and the Kruckeberg family farm in Worden, as Joe attended Rolla School of Mines. After moving to Springfield for Joe's job, Verlene was a homemaker and enjoyed helping with the many school and church activities her children were involved in. She loved sewing, crocheting, and working in her flower bed. After raising her children, she was a waitress and cook at Watt Brother's Pharmacy for many years until their closure. Verlene then went on to work at Peases for several years. She found enjoyment in volunteering as a St. John's Samaritan in the gift shops.

A celebration of life was held Saturday, Aug. 27, at Peace Lutheran Church with Pastor Mary Zupansic officiating. Burial was at New Spangle Cemetery in Staunton.

Memorials may be made to St. John's Children's Hospital, 800 E. Carpenter St., Springfield, IL 62769, or New Spangle Cemetery Association, 1632 Williamson Ave., Staunton, IL 62088. Condolences may be left online at butlerfuneralhomes.com. Butler Funeral Home in Springfield was in charge of arrangements.