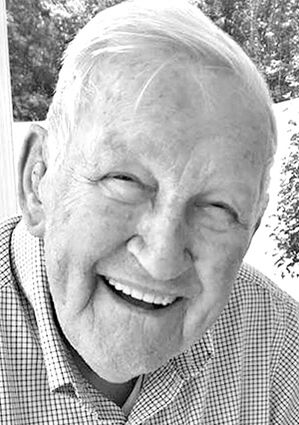 He served proudly in the Army Air Corps during World War II after attending Staunton schools. After returning from military service, he married J. Eleanora Polka and settled into a house on Harris Street where they raised their children: Kathy (Randy Legendre), JoEllen (Kevin Zuber), Del David and Mary Sue Stiegemeier.

In his early years, he was employed by the Progressive Grocers warehouse but, tuberculosis changed his career path. He then attended barber college in Decatur and began an internship with Bill Krug in his shop. Later he joined Bill Jacobs, then became his own boss at Del's Barber Shop near Pio Frank's Hardware store.

In the late 1980s, he ran for and was elected to the office of Staunton City Clerk, an office he held for three terms.

He was a member of St. Michael's Catholic church, the KC Council 2197 and served a term as its Grand Knight. He was also a member of the Staunton Lions Club, and Concordia Singing Society and Staunton VFW post.

In 2021 he was elected to the IBCA Hall of Fame as a Friend of Basketball for his dedication to the local high school program as scorekeeper and statistician.

Del created many doll houses and wine racks for St. Michael's Octoberfest raffles and countless home projects for family members. He could figure out a way to fix almost anything.

Sunday breakfast meetings at his house after church are legendary!

Memorials may be directed to the Staunton Food Pantry, St. Jude Hospital for Children, the Delbert W. Stiegemeier Scholarship Fund for the trades, the DAV transportation van service or the Staunton Elementary Patriot Club.

Condolences may be left online at williamsonfh.com. Williamson Funeral Home in Staunton is in charge of arrangements.