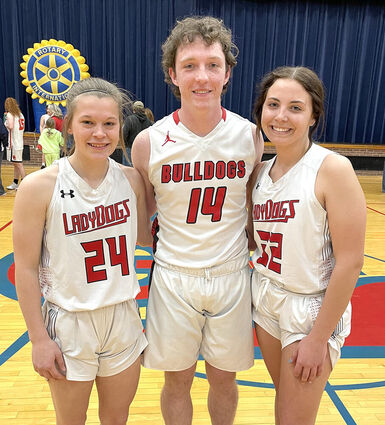 Bullog seniors (L to R) Caidy Tuetken, Cayden Silvester and Savannah Billings were selected to participate in the 2022 Carlinville Rotary Club All-Star Classic basketball game on Sunday, March 27, at Carlinville High School. They were among the top 58 boys and girls basketball seniors from South Central Illinois playing in the game. Twenty high schools were represented, including 28 girls and 30 boys.

Staunton was represented by Cayden Silvester on the West team.

The 3 point contest winner was Cooper Bertolino of Nokomis. He won in a 4-way shootout making 8 of 10 from the corners after sinking 9 in the first round.

The Slam dunk contest winner was Kyle Kuhn of Pana with a score of 41 out of 50.

Boys MVP was Drake Vogel of Hillsboro and Boys Coach of the Year was Adam Metzger of Pana.