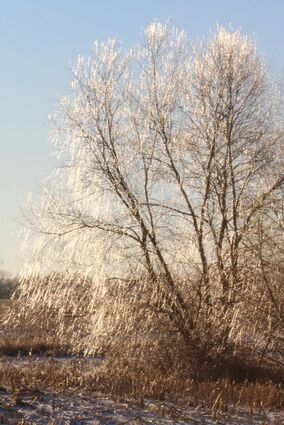 While no one likes to drive on ice, it does look beautiful as the sun makes it sparkle on trees and bushes.

Ice was the focus of the winter storm that started Wednesday with lots of rain. The heavy rainfall prior to the ice made pretreating the roads ineffective.

Sleet began late Thursday morning along with strong winds up to 40 m.p.h. The sleet continued until everything was covered in almost an inch of ice. The sleet was followed with freezing rain and rapidly falling temperatures then snow that continued on and off that evening. Schools were dismissed early on Thursday due to the icy conditions and some events were cancelled Thursday night.

The public was again advised to stay at home if at...