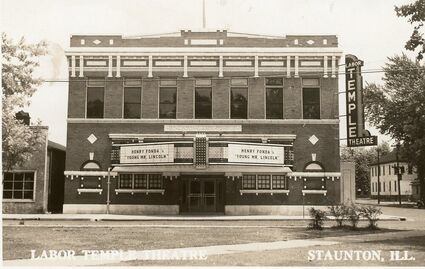 "Young Mr. Lincoln" (1939) was playing at the Temple Theater in Staunton when this photo was taken. It is one of the souvenir postcards that was sold in local stores, and there are many copies of it still around.

The Labor Temple was built in 1913 and the theater was added later. Labor meetings and community events were held there for many years. The theater showed movies nightly for much of its existence – many of them double features. Later it ran single features on the weekend only. The Temple Theatre was in operation until 1972.

Seen on the far right is the City Hotel located at 203...