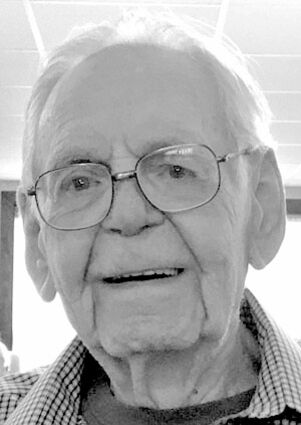 Edward Leonard Soapes, 92, died on Sunday, Nov. 28, 2021, at Stillwater Senior Living in Edwardsville, Ill. Ed was born in Staunton, a home birth, on May 24, 1929, the son of the late Ralph “Cotton” and Bertha (Scheller) Soapes. He married Barbara (Taylor) Soapes on May 7, 1951, in Pocahontas, Ark., and she survives. Earlier this year they celebrated their 70th wedding anniversary.

He was an only child, very curious, experimenting with things like jumping off the roof with an umbrella and taking apart his new mechanical Popeye to see how it worked. While the top was ruined, and he found no spinach, it proved to be a prediction of things to come, as he later excelled as a mechanic. He was an avid motorcyclist, and a member of the Midstate Motorcycle Club. He spent many hours helping lay out the flat track and working races along with his wife, Barb. He was a member of the First United Methodist Church, VFW, Masons, Elks Club, Teamsters 710 and Central States.

Ed worked many types of jobs in his lifetime. He worked at Olin, Waggoner Electric, Bowman’s Motorcycle Shop, Ford Motor Company, Hano, Buske Trucklines, and finished his career with Yellow Freight where he retired with 2 million miles, no accidents. Ed also ran his own service station in Mt. Olive for a time in the 1950s as well as sold and serviced Zundapp motorcycles out of his garage, as well as anything else on wheels that needed repaired.

Ed served in the United States Army during the Korean conflict, mustering out as Sergeant of the Motor Pool.

Funeral services were held on Thursday, Dec. 2, at the First United Methodist Church in Mt. Olive with Pastor Tommy Brewer officiating. Burial was in the Mt. Olive Cemetery.

Memorials should be directed to the First United Methodist Church of Mt. Olive or Mt. Olive Care Center. Condolences may be left online at beckerandson.com. Becker and Son Funeral Home in Mt. Olive was in charge of arrangements.