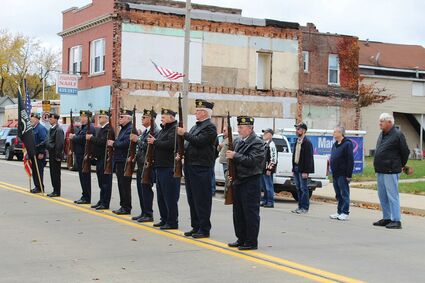 Members of the Staunton Veterans Honor Guard were joined by veterans from the crowd on Thursday as they honored all veterans in a brief ceremony at the Veterans Memorial on Main Street. The Star-Spangled Banner was played by young violinist Nicholas Monahan at 11 a.m. to start the ceremony. The honor guard gave a 21-gun salute and Jonathan Daugherty played Taps followed by his sister Hannah playing the Taps echo.